Question: Question 6 (a) What is the difference between a class and an object in object oriented pro grammi…… 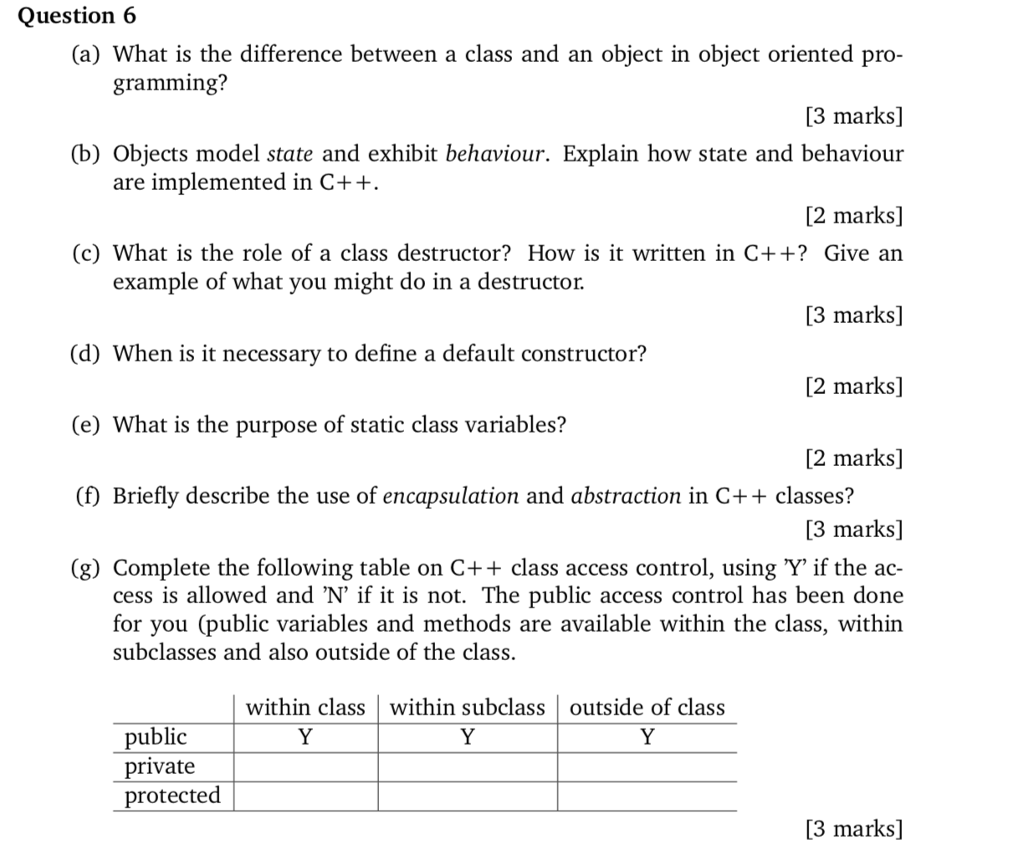 Show transcribed image textQuestion 6 (a) What is the difference between a class and an object in object oriented pro gramming? [3 marks] (b) Objects model state and exhibit behaviour. Explain how state and behaviour are implemented in C+ + [2 marks] (c) What is the role of a class destructor? How is it written in C++? Give an example of what you might do in a destructor. (d) When is it necessary to define a default constructor? (e) What is the purpose of static class variables? (f) Briefly describe the use of encapsulation and abstraction in C++ classes? [3 marks] [2 marks] [2 marks] [3 marks] (g) Complete the following table on C++ class access control, using Y if the ac- cess is allowed and ‘N’ if it is not.The public access control has been done for you (public variables and methods are available within the class, within subclasses and also outside of the class, within class within subclass outside of class public private protected [3 marks]

Hii…. Please check the below.

Don't use plagiarized sources. Get Your Custom Essay on
Question: Question 6 (a) What is the difference between a class and an object in object oriented pro grammi……
Get an essay WRITTEN FOR YOU, Plagiarism free, and by an EXPERT!
Order Essay

a. What is difference between class and object in object oriented programming language?

Class is a logical entity and group of similar objects. Class doesnt allocated memory when its create.

Object is an instance of class and it is real world entity. Object allocates memory when it is created.

Example: Class Fruit and we have different objects like Apple,Banana, Mango, Guava..etc.

b. Objects model state and exhibit behaviour. Explain how state and behaviour are implemented in c++?

Lamp is an object.

The “state” in lamp:on and off.

The “behavior” in lamp:turn on and turn off.

In c++ programming you declare states in “fields” and behaviors in “methods” etc..

c. What is role of destructor? How is written in c++? Give an example of what you might do in a destructor?

Destructor is a member function which destructs or deletes an object.

Destructors have same name as the class preceded by a tilde (~)

Destructors don’t take any argument and don’t return anything

d. When is it necessary to define a default constructor?

If no user-defined constructor exists for a class A and one is needed, the compiler implicitly declares a default parameterless constructor A::A().

e. What is the purpose of static class variable?

A variable declared static within the body of a function maintains its value between invocations of the function.

A variable declared static within a module (but outside the body of a function) is accessible by all functions within that module.

However, it is not accessible by functions from other modules.

static members exist as members of the class rather than as an instance in each object of the class.

There is only a single instance of each static data member for the entire class.

f. Briefly describe the use of encapsulation and abstraction in c++?

Abstraction: Hiding the data and showing the functionality.

In c++ we can use abstraction as

Members declared as public in a class, can be accessed from anywhere in the program.

Members declared as private in a class, can be accessed only from within the class. They are not allowed to be accessed from any part of code outside the class

Within class within subclass Outside class

Please check the answers and let me know any issues. Thank you. All the best.